As of 2018, a spin-off “sequel” of the series is being developed for television, with Monica Owusu-Breen as showrunner 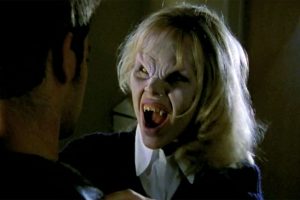 Grimm (2011)
Series created by Stephen Carpenter and Jim Kouf & David Greenwalt
The series’ narrative follows Portland Homicide detective Nick Burkhardt (played by David Giuntoli), who discovers he is a Grimm, the latest in a line of guardians who are sworn to keep the balance between humanity and mythological creatures, known as Wesen. The series features a supporting cast consisting of Russell Hornsby, Bitsie Tulloch, Silas Weir Mitchell, Sasha Roiz, Reggie Lee, Bree Turner, and Claire Coffee.

The Vampire Effect (2003)
Directed by Dante Lam and Donnie Yen
Staring Charlene Choi, Gillian Chung and Ekin Cheng
It’s a high-kicking battle on the dark side when an ace vampire slayer and his beautiful sidekicks wage the ultimate martial-arts showdown with one of the most dangerous of the undead.